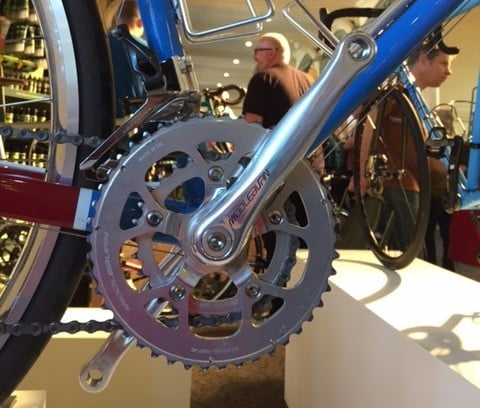 We spent Saturday 8th of April at the Bespoke Bicycle show, a huge gathering of bike fanatics from quite literally all over the United Kingdom! The show was great and we even had some of our very own products on display at the show. We spent a lot of time discussing bikes with our customers and a multitude of crazy bikes and creative components.

Andrew Jones is the designer behind the Cheshire based Moss Bikes. We were fortunate enough to have some of our items on display at their exhibit and had a good chat with Andrew about the show and the items he has to offer. We’re hoping to be working closely with Moss Bikes and Andrew post-show.

Ted James Design were another exhibitor that showcased out products and are a top frame building company so having our products alongside their exhibit was pretty great. The company has Ted James himself at the helm both making and designing the frames they sell.

Primarily producing terrain bikes, Stanforth have become one of the top frame builders in the UK. With Simon Stanforth designing their bikes and then Lee Cooper bringing them to life they have a really great team and it was awesome to see our products being shown on their stand.

The show boasted a ridiculous amount of bikes and biking components so it was great to see some of our very own products amongst the rest of the biking equipment. Our Middleburn cranks and chain rings made an appearance on a few bikes at the show.

The show was fantastic and it was a pleasure to attend! Seeing so many show worthy bikes in one place is always exciting for a bike enthusiast and seeing our own products being showcased at this year’s exhibit was brilliant! If you want to get your hands on some of the Middleburn components that were on display, make sure you check out the page for them on our site here.